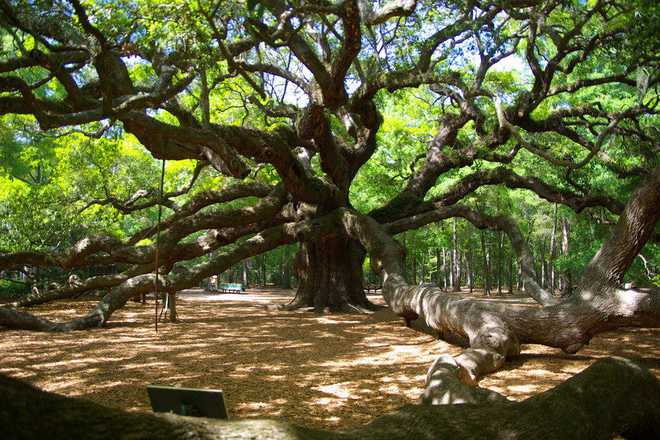 What would life in the south be without the majestic oak trees that pepper our landscape? Many of them are often older than the cities we live in! Let’s learn a little more about our friends that give us shade, fire wood, limbs to climb, and acorns for squirrels.

The live oak is a southern symbol of strength.
Oak wood is very dense making it very heavy – 55 pounds per cubic foot when dry. In fact, the U.S.S. Constitution reportedly received its nickname, “Old Ironsides,” during the War of 1812 because of its live oak hull. The hull was so tough that cannon balls fired from British war ships literally bounced off it.

Oak trees produce thousands of acorns every fall. But the trees have to be at least 15- 20 years old to do so.  Acorns are rich in protein, carbs, fats, and minerals such at calcium and potassium. That means animals use the fruit of oak trees as a natural food source.  Pigs, bears, deer, and squirrels eat a lot of acorns.

Oaks live hundreds of years if they can avoid lightning, disease, and chainsaws. The name “live oak” was coined because oaks are green all year long. They also support other life. One can regularly see birds nests, squirrels nests, and Spanish moss on oaks, each of which give the trees even more character. Live oaks also have to loosen their belts as time passes. They grow about an inch around each year. And these trees are a thirsty bunch – a mature oak can drink 50+ gallons of water per day through its deep roots. The oldest oaks in America are estimated to be between more than a thousand years old!

Live Oaks are one of the broadest spreading of the oak tree species, providing large areas of deep shade which is perfect for keeping the landscape cool. A mature live oak can stand between 60 and 100 feet tall. Crowns of the largest southern live oaks reach diameters of 150 feet—nearly large enough to shade half of a football field!

The Friendship Oak tree is located on the front lawn of the Southern Miss Gulf Park campus in Long Beach, Mississippi. In the last decade, the historic Friendship Oak survived Hurricane Katrina, another in a long string of hurricanes that have challenged yet never defeated the 500+ year old live oak tree. Friendship Oak keeps her majestic vigil on the Gulf of Mexico, a vigil that dates back to 1487.

This mammoth tree is estimated to be more than 1000 years old. It’s more than 37 feet in circumference and its crown spreads 150 feet.

The Cellon Oak is 83 feet tall and has a diameter of 108 inches. It’s crown is as big as the Seven Sisters Oak at 150 feet. This tree is so big, it can be seen from space.

This tree is said to be nearly 1,500 years old! Can you grasp that? Do you know what was going on in the world back in the 500’s? Neither do we. But a little acorn named Angel was growing in a wooded land destined to part of America 1,200 years later.

This is the place in the 1800’s where men would have duels under the oaks in City Park. There were originally two dueling oaks, but the 1949 hurricane took care of that.

Let’s all be happy for majestic oak trees. They beautify our area and enrich our lives.